There are numerous different types of residential properties to be found throughout the United Kingdom. However, not all may be suitable for your unique requirements. Let’s take the guesswork out of the picture by listing all of the most common variants as well as the bespoke aspects of each. You can then make an informed and educated decision at the appropriate time.

It is currently estimated that there are more than 25 million residential properties throughout the United Kingdom. From detached homes and flats to bungalows and cottages, you have a host of amazing options at your disposal. There is still no doubt that finding the most appropriate structure for your needs can be a bit tricky. Let us examine these and other variants in greater detail. What are the advantages of specific properties? What does each have in store? How will price come into play? These important questions deserve a great deal of attention if you hope to obtain the insight and clarity required to make the best choice possible.

Click to Apply Free Insulation and Installation in SW

As the name already suggests, detached houses do not share any walls with a separate structure. They also tend to have both front and back gardens. Associated with a greater degree of privacy when compared to other variants, these units are often ideal solutions for those who have children. The median price for a detached house (at the time that this article was written) is £242,286. If you are curious to know the worth of your property, feel free to use our online house valuation tool at your disposal.

These are actually some of the most well-known and iconic housing types within the United Kingdom. Terraced houses are connected by a single wall on either side; leading to a literal “row” of structures that occupy a street. The main advantage here is that this type of construction saves a great deal of space. This is why they are quite popular within urban districts where land is at a premium. The prices of these properties are also somewhat lower due to the fact that front or back gardens are sometimes absent from their design (although some may contain small front yards). According to government figures compiled in January 2018, the average price for a terraced home is £194,167. 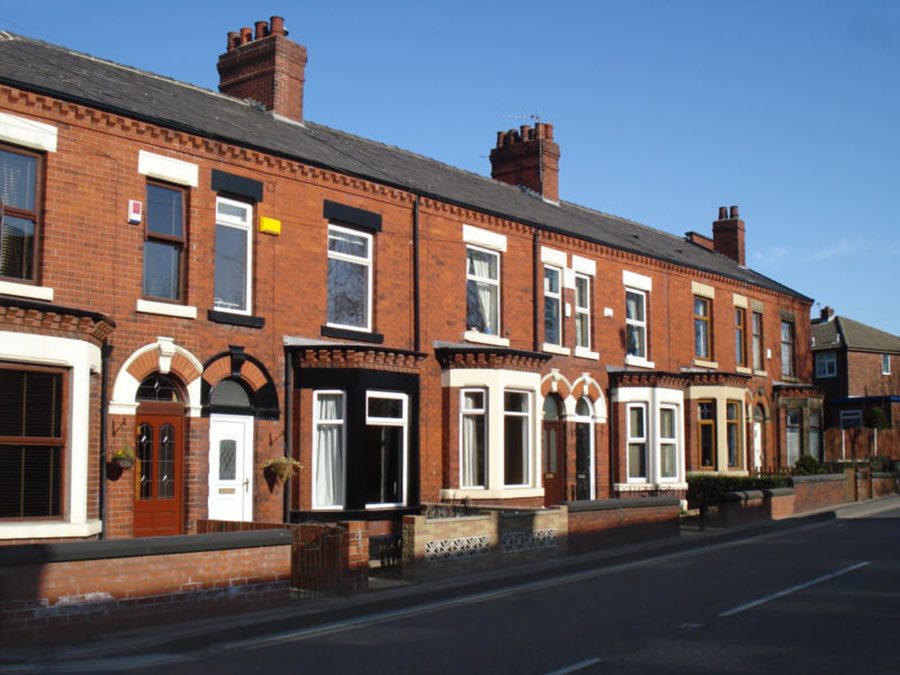 The only main difference between end-of-terrace houses and the terraced counterparts mentioned previously is that these structures are found at the terminal of a row of homes. In other words, only one wall is shared with an adjacent structure. This is why such houses are often found at the end of a road or on a cul-de-sac. This is also the reason why end-of-terrace homes are priced slightly higher. Some studies have found that these structures cost as much as 18 per cent more than normal terraced homes.

There is no doubt that flats are by far the most well-known types of homes in the UK. Often being offered as a series within a single building, flats are known for their space-saving qualities as well as their convenience. These structures can either be rented on a contractual basis or purchased (the former is quite common). Flats are ideal for single individuals or those with small families due to the fact that they are often much more affordable when compared to detached or semi-detached houses. In fact, the average rental price of a flat (taking into account both urban and rural locations) is approximately £650. Purchase prices will naturally vary and if you would like to get a better idea of what flats have recently sold for in your area, take a look at our sold house price tool. 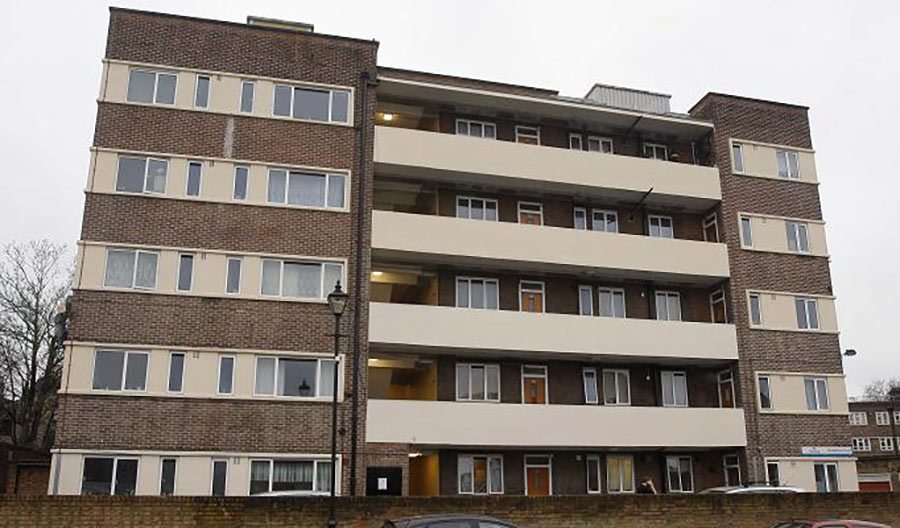 The name for these types of residential properties is actually a bit of a misnomer. Converted flats are often houses that have been split into two sections; a top and bottom half. Either of these can be considered a flat while the other portion is normally where the owner resides. Please note that larger structures can be divided into multiple sections (such as individual bedroom-bathroom combinations) which can be rented separately. Depending upon the property in question, converted flats may or may not offer front and back gardens. The price of these locations fluctuates; depending upon issues such as the age of the property, its overall size and the cost of renting a section out to a customer.

These types of homes in the UK are sometimes referred to as duplexes due to the fact that their area is segmented into an upper and lower half. A staircase normally separates these two areas; providing a number of options in terms of interior design and overall living arrangements. However, split-level flats are generally the same overall size as their standard counterparts. As you might have already imagined, the prices of a duplex will depend upon several features. The size of the building, the amount of interior space, nearby attractions, mean neighbourhood values, and the age of the property are a handful of factors which will be taken into account. This is why some duplexes can cost as little as £70,000 to purchase while others are listed at well over £350,000.

Studio flats are known for their open-air design and they are often chosen by individuals or young couples due to the fact that a limited amount of space might not be ideally suited for an entire family. These flats offer a kitchen, living room and bathroom with only a minimum number of walls separating each section. These types of residential properties are often some of the most economical choices if you happen to be on a budget, as rental prices are amenable. The average rental cost of a one-bedroom studio flat in the United Kingdom is currently £600 and naturally, the purchase price can vary substantially. For example, some can be valued as low as £30,000 while high-end properties will often sell for £400,000 or more.

These traditional types of homes in the UK are often found throughout the more rural areas and some are hundreds of years old. Cottages are known for their sturdy construction, thick walls and traditional atmosphere. They can be one or two storeys high and the majority offer access to substantial gardens. Cottages are often used as holiday homes, as owners can easily rent them out on a seasonal basis. Those who are looking to purchase such a unit for an average price of £243,583 although once again, some locations will cost much more or substantially less. If you are interested in such an investment, it is always prudent to use our budget calculator to appreciate how much you can afford to spend.

Bungalows are normally single-storey structures which are detached from other nearby homes. One of the easiest ways to differentiate between a bungalow and a detached house is the fact that bungalows tend to be much smaller. The majority contain only a handful of rooms although there might be extra space contained within an attic. Bungalows are great for those who wish to purchase a part-time holiday home. According to figures released in 2016, the average asking price for a two-bedroom bungalow was £273,377.

Out of all of the housing types in the UK, mansions and conservation properties are by far the most sought-after and luxurious; particularly for those who can afford such investments. Often known for their spacious nature and rich history, some of these structures are centuries old. A handful are also listed as historical locations of interest, so issues such as adding new construction or obtaining planning permission are often extremely restricted. According to Foxtons, the average price for a property within a Diamond Conservation area has actually fallen by 3.76 per cent to £587,646.

All of these types of residential properties in the UK offer their own unique benefits and attributes. This is why performing a good amount of research in advance is always wise. If you would like to learn more about moving home or property advice in general, we are always here to help.

Sure, everyone’s heard of a flat, but what about its lesser known cousin, the maisonette? Well, as the linguists among us could probably guess, a maisonette derives from the french term for ‘small house’. Which is, essentially, what a maisonette is. They were introduced in the 1960s and 1970s as a way of promoting higher density living into the suburbs, before blocks of flats were as common as they are now.

A maisonette is a two-storey flat, where your front door is your own. This means that you can exit your home directly to the outside, as opposed to a regular flat where you have a shared corridor.

No private entrance, means no claim to the name – often you may hear them being referred to as a ‘duplex’, their american title. A great way to think of maisonettes is simply a ‘house on stilts’, as they are often located over shops, garages, or other maisonettes.

We use cookies on our website to give you the most relevant experience by remembering your preferences and repeat visits. By clicking “Accept”, you consent to the use of ALL the cookies.
Cookie settingsACCEPT
Manage consent

Any cookies that may not be particularly necessary for the website to function and is used specifically to collect user personal data via analytics, ads, other embedded contents are termed as non-necessary cookies. It is mandatory to procure user consent prior to running these cookies on your website.